By all accounts, this was a very successful #AcWriMo for me!

I went into the month of “writing like there’s no December!” with modest plans: just 30 minutes a day, 6 days a week. I just needed to get myself back in the habit of doing research regularly, since research had completely fallen by the wayside this term. My secondary goal: to draft my own private “research proposal” as a way to frame how to spend my sabbatical time.

Because I love me a good chart, here’s a chart that shows the number of minutes and number of words per day I accomplished during the month: 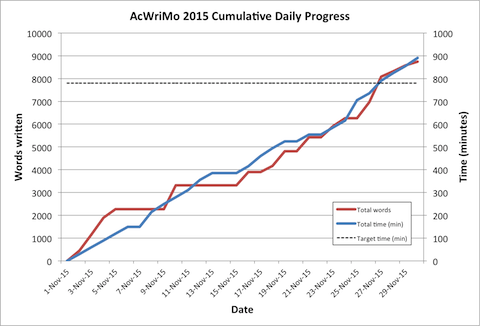 Figure 1: Time and minutes spent per day on research activities. Note that I did not have a goal for the number of words, but it was interesting to track this anyway.

I didn’t always hit my 6 days a week goal, but I did end up exceeding my time goal overall. Some days I worked for longer than 30 minutes, and I always worked on research at least 5 days each week. I’m super happy with that. Also, the weeks I decided against the 6th day of research were deliberate decisions, usually because mentally I knew I needed a break.

I spent the time very productively, too:

Most importantly, even though I “didn’t have time to do research this term”, I found that the simple act of doing research for 30 minutes a day actually made me more productive overall! Since I had to prioritize my tasks to incorporate research, I spent less time on things I should be spending less time on, and was smarter about allocating the rest of my time.

There was one aspect of this year’s #AcWriMo that I didn’t expect, and that almost derailed me at the start of the month. Longtime readers of this blog may recall that my father passed away somewhat unexpectedly last April. Since that time, I’ve found research to be an epic struggle. During the first week of #AcWriMo, I realized why: going back to my research, in my mind, meant revisiting that time period, which meant starting to deal with my grief. Ignoring my research became a way for me to avoid the grieving process. #AcWriMo forced me to face this head on—and yes, to finally start grieving the loss of my dad. I was able to finally untangle my research from my grieving, and to start to make progress on both fronts.

I plan on continuing this momentum into December, by participating in the new grassroots #AcWriAdv (academic writing advent)—you can follow my progress on Twitter. My goals for #AcWriAdv will focus mainly on consistency (30 minutes a day, 6 days a week), with a plan specifically to continue work on the conference paper-in-progress and the simulation development. By the end of December, I hope to firmly establish research habits that will carry me into and through winter term—which looks to be as crazy, if not crazier, than fall term. (Gulp.)

One thought on “#AcWriMo 2015: the final accounting”